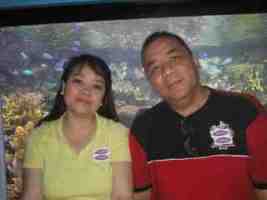 This post was originally called “Useful Tips from Mariel on what to do when your Life’s a Mess”. But my daughter Sam asked me to edit it as it was boringly long. Also she said it might be better to be “cryptic” as more people will be drawn to it out of curiousity. She’s 9 years old and I’m taking advice from her. Such is my life now.

It’s been some days since my last blog. Partly because I lost my internet connection (which is obviously back now). Also, I guess the more “mundane” stuff of life have caught up with me too (read bills, bills and more bills). Mariel had always “protected” me from these as I’ve always thought bills were junk mail meant to be dispensed with. The fog of bereavement too has lifted as most people have stopped speaking to me in hushed tones or acting deferentially. As they like to say “Life must move on”. But moving on is easier said than done when you have to care for a nine- year old daughter and deal with your clients’ egos at work at the same time . Well I guess I may have to take some tips from Mariel because “that” is what she did everyday of our married life. So I tried my best to “predict” what Mariel would have done if she were in my shoes and life’s a mess, as it is now for me. Here goes:

Mariel never failed to seek God’s guidance and protection above all. In our most desperate of moments, when she was already so gravely ill at the UST Hospital, she steadfastly kept faith and faced her sickness with both courage and grace. She never once wavered as she knew that the Lord always kept her best interest at heart.

In our years together, she also never failed to remind me to be thankful for whatever little blessings came our way, even if it meant literally dragging me to Church every Sunday. She went on novenas when Sam got sick. Never one to “broadcast” her piety, Mariel always kept her prayerful life away from public view. She is still my angel today keeping me on God’s path.

Mariel always knew her priorities. She always decided to do the most critically important things first above the seemingly urgent. (Stephen Covey wrote about it, but Mariel really practiced it) She also was never swayed by the socially expedient over doing the right thing, most specially if it concerned our daughter Sam. I shall always try to be guided by her example and keep myself from being distracted by the “non-essentials”.

Mariel often advised me to accept my limitations. She was my greatest cheerleader but she’d be first to tell me to “cut my losses” when prudence dictated it. She tried to keep me from squandering precious time on quixotic pursuits and made me confront squarely my “realities”. She did this unpleasant task though with such gentleness that I had never felt oppressed. She did it too because she loved me so much and did not want to see me “get hurt” in the end. And, of course, she was always right.

Mariel never hesitated to do anything important even if it meant some personal sacrifice or discomfort. She would often bring home some work from the office and soldiered on till about 3 in the morning simply because they needed to get done. She never complained, blamed anyone or whined. She just did what she believed was necessary. I wished I had her great sense of duty and utter lack of “theatrics”.

While Mariel believed in getting things done, she was not above relaxing or getting a good leg and foot massage. She often wanted a few minutes of massage (courtesy of yours truly) before going to bed, “to rest and live to fight another day”. She knew the value of a well-deserved pause before going back to the trenches. Don’t worry Mariel, I will be back to giving you your well-earned massages when we next meet. I love you Mommy.

4 thoughts on “Useful Tips from Mariel”