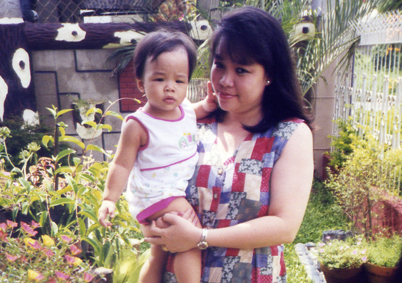 We were overjoyed the day we found out she was pregnant with Sam, although I must admit I was a little anxious then about my new role as incoming dad. Mariel was however, to quote her beloved cousin Annie, “over the moon, and thankful that she was given a chance to be a mom.” Because she truly loved children. Mariel was the most “famous” aunt of the Francia clan. Her nephews and nieces always came to her whenever they wanted “something” from their own moms and dads. She was hard to refuse because she never came to you asking anything for herself. The words selfless and giving are often heard from people trying to describe Mariel. So you can further imagine to what lengths she’d go to when it came to her own daughter’s needs.

Before Sam was born, we took those much-awaited weekly excursions to the “Baby Section” at the mall to shop for the best baby things we can afford. It was like a treasure hunt every time. She’d rummage through all the baby clothes trying to find that perfect shade of pink or lilac. On the other hand, she also took great care to remain healthy and not risk anything that might “harm” Sam. I remember her preferring to endure an aching tooth rather than take painkillers that she believed could even remotely have some adverse effects on our daughter. She also played ‘classical music” through headphones propped on her tummy having read somewhere that this can be beneficial to fetal development. Mariel simply would do anything for her “Sammy”. (By the way, she named her after the female lead of the original TV sitcom “Bewitched” because she found her so lovable and bubbly that she promised to name her daughter Samantha too someday.)

Then Samantha came to us on a sunny day in June. Mariel was so ecstatic that our daughter opened her eyes immediately after she was delivered. She was even so proud of Sam’s “Apgar score” of 10. All I can recall myself was trembling and being at a loss when the nurse tried to hand me Sam knowing I’ve never touched such a fragile little thing before . I can even see now Mariel’s face like when I first met her at our hospital room coming out the O.R. Not being allowed to talk right away after the C-section, she simply gazed at me with her loving eyes as if telling me how much of an ordeal she’d just been through and aching to get a hug. But also I remember seeing a glow of peace, contentment and joy for finally we had both received our heart’s desire.

Sam was so special to us that Mariel had a small “birthday” party prepared each month until our daughter’s actual first-year birthday celebration. We’d invite both our families and have cake and all the usual treats. Onwards, Sammy’s birthdays were “little productions” inspired by every possible children’s theme. We went through Disney Princesses, Bratz, Winx Club and even a Hawaiian poolside party. Far from being extravagant gatherings though, Mariel had managed by just planning everything in advance. She looked for discounts on party favors six months before, creatively mixing and matching colorful plates and napkins while I cheered on from the bleachers and she did all the real work. I would just invariably get my “fat ass” ready for the candle-blowing each time. (Speaking of which, I have not yet prepared anything for Sam’s 10th coming in about a week. Better start working on something “nice” soon because Mariel expects nothing less.) Mariel doted on her daughter that she loved dressing her up for school plays, dances and of course Halloween. Sam therefore has an “imeldific” amount of clothes and costumes. And if you ever wanted to see Mariel’s face light up with delight, merely steer the conversation towards children and if asked, she could talk for days on end about our daughter.

Mariel loved Sam very, very much. But she could be unsentimental when it came to disciplining her “baby”. She did not give in to the expected, “manipulative” crying games. She stood firm on principles to teach our daughter (and sometimes, me included) that successful living is to a major part a lot of “maintenance work” and minding the boring, little details like brushing one’s teeth and doing schoolwork before television. (it must be the CPA in her) She did what had to be done and this consistency had borne fruit in Sam’s caring and responsible ways today.

Re-telling Mariel’s winning ways of course wont be complete without talking about how Mariel had sacrificed career over the opportunity to raise up a daughter well. Mariel had shied away from the idea of working for some promotion as it could entail allocating more time for the office and consequently less for her daughter. Every single day she would be calling from the car on her way home already giving Sam pointers for her homework and thus making more time for school work. She would also labor at the computer doing 50- page “reviewers” that made the actual school exams look easy. She encouraged Sam to read a lot such that daily treats were usually educational storybooks and not more “toys”. Because of this, Sam was (modesty aside) prominently always at the top of her class. Mariel was solely responsible for this aspect of our daughter’s development. So I know it hurts her a little sometimes that people would comment that our daughter does well in school because she “follows after” her daddy. Well the secret is out, It wasn’t really me and I was just pretty good at creating hype.

Many of you know that Sam has done very well too at musical theater. It was Mariel’s idea to send her to summer theater workshop at around 5 years old, initially to help our “baby” overcome her shyness. Subsequently after being pleasantly surprised to find our daughter excelling at this craft, Mariel did a whole lot to encourage Sam to develop her gift from God. She’d buy her Broadway CDs and videos and often asked Sam to sing to her, mostly before bedtime. It was all in the spirit of fun and games. That’s why Sam enjoys doing this on stage today. Now I have the responsibility of carrying on with Mariel’s loving legacy to our daughter. And I never fail to remind her to “perform well” for Mommy and honor God’s blessing.

I could ramble on and on about Mariel’s many fine qualities as a mother. But I guess that one Sam and I will miss most are the many days and nights spent plainly with just the three of us hugging on our big, soft bed. Whether it was reading a favorite book or simply engaging in idle banter about that next dream vacation, Mariel just loved to pass time away blissfully celebrating our togetherness. For she had wanted nothing more from life except to be simply near her baby “Samanting” (one of her many names of endearment for Sam) and me. We had never asked for great material possessions, all we had wished for was just to be with each other always.

And while Mariel may not be the perfect mother. She had worked very hard all the time to be so close to being one. And for Sam and me, she will forever be the ONLY “Greatest Mommy in the World”.

“A thousand good nights”, Mommy. We love you.

8 thoughts on “Mariel As Mother”